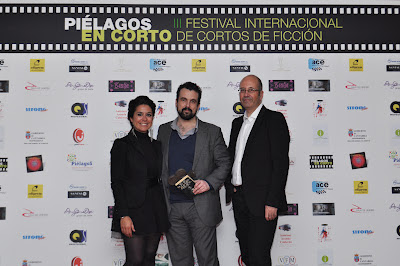 How was the reaction of the public to the Third International Pielagos Short Film Festival ?

As in previous years, despite the budget cuts, the number of spectators has slowly been increasing at the various sessions scheduled. The existing population dispersion in the municipality of Piélagos (there are 13 villages) makes a massive attendance difficult, but we are happy because each time there are more people willing to attend and enjoy the screenings.

What differences have you noticed compared to previous years?

The festival is becoming one of the most important of Cantabria, of northern Spain even. For this category of festival, with only 3 editions, there were more than 400 entries to the competition from a dozen countries, almost surpassing festivals with more than 10 editions. The festival is acclaimed for the quality of the selected works, and our friendly treatment of our participants and finalists. The quality of the work received has increased considerably, however the support of institutions and companies has decreased due to cutbacks.

What is your overall opinion about this year´s edition? How do you see the future of the festival?

Very positive. The number of participants has increased, the quality of the submissions has been exceptional, and the feedback received from participants, guests and visitors has been very positive. In addition, the municipal corporation has confirmed its intention to continue supporting the festival in future years.

What does the presence of Nacho Vigalondo at the festival mean for you?

The presence of Vigalondo, like the rest of honorees of the festival, is an honour for us. These are professionals who carry the name of Cantabria in the audiovisual field beyond our borders and for this reason we pay tribute to their work. Our aim is always to surprise the honorees and I think we succeeded. If you want firsthand information ask Nacho Vigalondo, Hazas Martha, Ruth and Fernando Diaz Chinarro.
Let's talk about your work and the production company Garcifilms.  At what stage is the feature film project "The Other´s Shadow"?

The film project is currently in negotiations for a possible co-production between several Spanish production companies and GarciFilms. There is even the possibility of co-production with a foreign company.   After the break in filming, in recent weeks we having been getting closer to completing the project, nevertheless, given the difficult current situation, we cannot guarantee anything until we reach a definite arrangement.

Tell us about "The Other´s Shadow".

"The Other´s Shadow" is a psychological thriller, a tale that mixes suspense and human passion. It's a classic genre film, which will keep the viewer restless in his chair without really knowing what is happening.

What other projects are you working on or have in mind for the near future?

I'm currently working on the post-production of two short films: "At the end of the day" and "Imagine". I'm also producing a very interesting documentary entitled "They talk about sex", directed by Maria Luisa Ramos, and I am also embarked on writing two film scripts: "The Winter Hunger", a thriller and horror film, and "Finding Leo ", a family drama based on the Basque issue.

There are several more projects as well: an ambitious horror short film set in space, "No Gravity"; the stage adaptation of "Beautiful Pepa", one of my short films; and the set up and direction of the play "The Importance of Being Earnest". And several more things.

And soon I will be working on the 4th Pielagos Festival.

Finally, how do you see the "always-in-crisis" Spanish and Cantabrian film industry? Do you think it will be affected by the recent economic measures related to culture?

If the Spanish film situation is suffering, you can imagine the situation of Cantabria. Nacho Vigalondo said at the close of the Pielagos festival: "Cuts are fine, there will be less competition", that is to say, only those 3 or 4 producers who have been making films traditionally will keep on doing so. In the national environment launching a project is unthinkable nowadays (in fact 80% of them are stalled), but in Cantabria, the possibility of starting a project is zero. The situation is different if we talk about short films. A short film maker may succeed with a good idea. Not economically speaking, of course, but in terms of  recognition.

With the economic cuts and the planned tax deductions to generate  investment in film-making, I think we are heading for even more difficult times. We will have to sharpen our wits, work harder and adapt the stories to resources.